Posted on 04/25/201806/22/2018 by Amanda Messier Posted in Finance, LifestyleTagged Balance, Debt, Millennials, Priorities, Tuition
Coming from a lower middle class family I grew up with enough to have a happy childhood, no less or more. Our packed lunches were always peanut butter sandwiches wrapped in tinfoil, and almost every dinner had some type of  frozen vegetable on the side. We didn’t go on every school trip but we went camping down the cape in the summers and played softball for the town youth league. My parents have always been our biggest fans and did everything they could for us, but never once did they try to hide their struggles. One of my earlier memories is from when we had just moved from a two bedroom apartment into a house (equivalent in cost to my student loans, still trying not to cry over this fact). It was summer and I wandered into the yard to see my mom sitting in the garden crying. When I asked her what was wrong she said that she didn’t know if we’d be able to keep the house.
To a first grader.
So, I did what any other first grader would do. I started a dog walking business. And a welcome mat business (I covered roofing grip in glitter glue and tried to sell them with flyers at Shaws). Neither were very successful but I think that exact moment – and that conversation – were a defining point in my life. For as long as I can remember I had a plan to go to college, become extremely successful doing something I love, and be financially comfortable. I started babysitting when I was 11 years old and got my first real job the day after my 14th birthday. I haven’t been unemployed since; I’ve always had my eye on the prize and told myself that the struggle was temporary. I would be a college educated adult making enough money to live in a nice apartment and go out to dinner and wear nice clothes and send my parents on the vacation they’ve always deserved.
Fast forward to my reality check in 2014, when I found out that even though I wasn’t a college kid anymore I was still going to have to live like one. After that initial shock wore off and I stopped feeling sorry for myself, I knew I had to devise a plan.

When I got out of school, my main priority was proving to my parents that I wasn’t going to screw them over – because lets be honest, they were scared shitless of getting stuck with my loans. After 18 months, $16,000 in payments, and a life insurance policy that ensured financial protection for my parents I was in a rough place financially and the looming debt hanging over my head for the next 15 years was making me feel so stuck in life. This is when I finally stopped sulking and accepted it for what it is, and decided to do something about it. I wish I had thought of this sooner, or at least did enough research to know I had more options than just what my loan company was offering. Even though I was in crippling debt, I had some control of how I wanted this to go.

My loans were divided into two major categories: subsidized and unsubsidized. The major difference between these two types of loans is that subsidized loans are federal loans with typically lower interest rates and no interest accruement while you are in school. Unsubsidized loans on the other hand begin accruing interest immediately and typically have a higher interest rate; for me it was roughly a 4% difference in interest. That may not sound like much, but when you have loans like mine that can add up to thousands of dollars extra paid to the big bad lenders. Don’t just accept what they’re offering, fight for better.

After reviewing my loans in depth, I decided I needed to fight for lower interest rates on my loans.  I thought about the timeline of my loan terms and how I could shorten that; how I could get out from under the man’s thumb as quickly as possible without sacrificing too much quality of life.
I created an excel sheet and pulled in my total loan amount, then put in formulas to calculate interest and principal payments per year over the next 10 years. I played with the interest rates, and added a column for ‘additional payments’ per year. I looked over my finances to see what the absolute maximum I could pay each month would be. 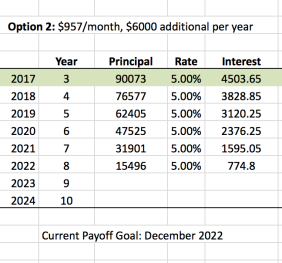 When I was done, I had my plan. I needed to get my loans to a 5% or less interest rate. I would also pay an additional $6000 per year on top of a monthly payment of $1000. I decided not to consolidate my subsidized and unsubsidized loans since the interest rates on my subsidized loans were already at 3-5%, but instead just to refinance the large unsubsidized loan. If I could sustain this, I would finish paying my loans in December 2022; 8 years earlier than the 15 year plan I had originally signed up for.

Now that I knew what I wanted, I did some research around who to refinance my loans through. I read blog posts and articles comparing different lenders; apparently there was a demand for this type of information out there. After many sticky notes and pro/con lists I finally decided on a lender who offered “as low as 3.25% interest rate” and was a trusted, well known financial establishment. I set an appointment and printed everything from my loan statements to my credit card score to my resume (incase they needed it?) and took my dad with me.
I brought my dad for two reasons. One: because the loans I was refinancing were still in his name and two: because my dad will tell it like it is. If he thinks I’m making a bad financial decision he won’t hesitate to tell me. As someone who has been known to make spontaneous, rash decisions it was good to have him there as an anchor and a voice of reason. As much as I had to admit it, I can be easily sold to.

I came into my meeting with a folder full of papers dressed like I was interviewing for a job. Before the advisor was even seated I started my pitch (I was in sales at this point too) laying out my plan in front of the two of them, highlighting numbers and explaining what I wanted to do and what I needed from them to achieve this. The advisor was impressed by my extensively researched, meticulously calculated plan and told me she would try to get me to that 5% interest rate. She answered my list of questions that I had written out while researching and with with my dads nod of approval I put in the application.
When the details came back, I had been approved for a 5.25% interest rate. I had great credit but was still young so it didn’t have enough tenure to get me that sweet 3.25% interest rate like in the ad. I had no cosigner for this loan either; a huge part of why I was doing this was to remove my loans from my parents names and take that worry out of the back of their minds. Luckily I had done my research and knew this lender offered the following deals:
.25% off interest rate when you open a bank account with this company
.25% off interest rate when you do automated payments on a monthly basis
I got myself signed up for both of these and came out of the meeting with a 4.75% interest rate and the weight of my loans on my shoulders now, and as heavy as it was it felt pretty damn good.

My refinanced plan went into effect on January 3rd, with the old lender sending me a congratulatory “you’ve paid off your loans” email (I wish) when this happened. Now that I was on this new plan, I had to make sure I stuck to it.
It has been about 18 months since I refinanced, and so far I have been able to stick with my plan. I can’t say it has all been easy; I had to pick up a second gig as a cocktail waitress for a while before getting a raise, and ended up moving out of my fancy apartment into a much cheaper in-law apartment with my boyfriend. Any tax money I get back goes straight towards my loans, and I’ve started taking an additional $200 a month out of my check for my loans to meet that goal of paying an extra $6000 per year.
While it has been tough, I can honestly say that I feel like I’ve found the balance between paying down my loans and living the life that I want right now. My personal goals at this point are around career growth and seeing the world, while others may be focused on saving for a house or starting a family. It doesn’t matter what your goals are, but the important thing is that you can’t let life slip by while your paying down your debt. I constantly remind myself that this situation is only temporary, and I can’t let my loans rule my 20s. So while I continue to grow as a professional and a person, they will continue to shrink. And as excited as I am for December 2022 to roll around, I’m enjoying the ride.